A further collection of biographies of notable people associated with Wotton-under-Edge. The 6 articles were originally published in the Wotton-under-Edge Historical Society Journals between 2000 and 2005. All the subjects were either born in or around Wotton or chose to make the town their home. Some have contributed directly to the community, others have enhanced Wotton's name by their achievements. Included are:
Margery Legat - a fourteenth century lady
Sir Charles Blagden M.D., F.R.S, 1748-1820
The Penley Family 1811-1928
Rev. Mathew Blagden Hale 1811-1895
John Southwood 1874-1954
Donald Milner O.B.E., A.R.C.A., M.A., P.P.R.W.A. 1898-1993 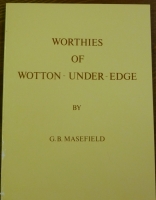 This book is out of print but is available in the Heritage Centre Research Room for viewing.