A Brief History of Wotton-under-Edge
The history of Wotton-under-Edge spans the last two thousand years and the landscape and features in and around the town bear witness to human presence and activity.
Whilst the first mention of Wotton dates back to 940 AD, the remains of an Iron Age fort just above the town show how this valley at the bottom of the wooded scarp to the Cotswolds has always supported industry, first as a centre from where to harvest woodland resources ('wude' is Saxon for wood, and 'ton' means village), then as a thriving wool town.
Following its industrial peak in the 17th and 18th centuries, the Victorian period did not force large scale industry on Wotton, mainly because transportation to other locations such as Stroud and Dursley was easier. This has left the town centre more or less untouched since the early Victorian period, with a number of late mediaeval, Jacobean and Regency houses which are still in use today.
Today, Wotton-under-Edge is a thriving market town, proud of its long heritage but also welcoming to visitors. If you come to the Heritage Centre, you will find on display a number of artefacts from most of the key periods of the town history, from Roman pottery to post-war rationing cards.

The Early History of Wotton-under-Edge

There is little doubt that Wotton, or at least the woods around it, were inhabited from the late Neolithic period. The remains of thee prehistoric barrows are still visible near the town: both a long and a round barrow near Symonds Hall Farm and a round barrow on Blackquarries Hill. 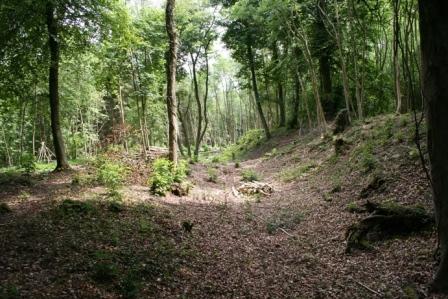 There is more evidence for human habitation in a later period: even the most casual walker on the Cotswold Way could not fail to notice some strange ditches in the woods above Wotton. These are the remains of an Iron Age Fort, known as Brackenbury Ditches.

Wotton-under-Edge in the Middle Ages

The middle ages saw the growth of Wudetun into Wotton-under-Edge. The town, first mentioned in a Saxon royal charter in 940, was then listed in the Doomsday book as Vutune, a dependency of the manor of Berkeley . Wotton history in the middle ages was inextricably linked with that of the Berkeleys, whose Norman castle still stands a few miles to the west of the town.

Through an often troubled relationship, Wotton gained a lasting heritage from the Berkeleys, not least the Katherine Lady Berkeley’s secondary school (founded in 1384). It also gained Borough status in 1253 as proof of the fast growth from Saxon woodland settlement to thriving market town.

England in the late middle ages was a rich land, where commerce with the continent centred on the wool and cloth trade. Many famous cities’ made their fortunes in the period between 1400 and 1600. One only has to think of the large cathedrals in Exeter or Ely to be reminded that very large fortunes indeed could be made by trading the rich local wool with the wines, silks and gold of the continent.

Gloucestershire founds its own specialisation in this trade. Most of the famous red cloth of which the uniforms of the British army were made in the 1700s and early 1800s were produced locally and sold to the British as well as foreign governments.  The red cloth was favoured because it was the cheapest material made. In a smaller but significant way, Wotton too benefited from the wool trade: the local Church is a reminder that even small towns could afford large public buildings. And, whilst all that remains of the large Abbey at Kingswood is now the Gatehouse, that too should be seen as a symbol of local prosperity and wealth. 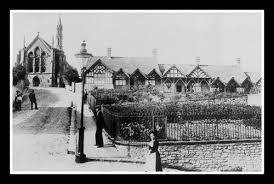 In contrast to the wealth of the late 16th century, the Industrial revolution skipped Wotton in favour of locations where transport, by road, water or rail was easier.

The small cottage industry of weavers that had made Wotton into a prosperous town declined steadily in the late 18th Century, and by Victorian times Wotton had reverted to being a small market town, serving the needs of a shrinking local population.

Fortunately for us, this was also the time when photography became a popular pastime among the landed gentry, and the Heritage Centre has a fine collection of early photographs going back to 1850.

Wotton today is a small town, where modern buildings blend happily with fine example of Georgian architecture. Wotton saw very little industrialization in the 19th and 20th centuries, and the result is a town whose slow growth has left many visible reminders of the past in the streets and surrounding areas.