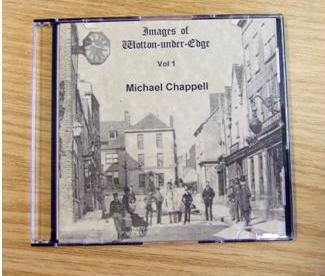 The Heritage Centre has a wide range of gifts for visitors to choose from, including jewellery, locally made handicrafts, toys, books and CDs. 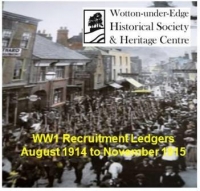 Two Army Books 69, Cash Book and Ledger, were donated to Wotton-under-Edge Historical Society in the mid-1990s. They were accessioned and recorded as Recruit Books 1914 and appropriately stored. Their unique importance was unrecognised and they remained undiscovered until mid-2014 when the Society was assessing the material it held for an exhibition on the start of WW1. They contain a wealth of social history information.

Twenty three days after the declaration of WW1 the first Ledger was opened on 27th August 1914 with the last entry being on 30th November 1915, prior to conscription in January 1916. There are 465 men listed with 167 believed to have served their King and Country. Twenty four of those listed are known to have died during the conflict, being listed on the Wotton-under-Edge War Memorial, the Roll of Honour displayed in the Town Hall and in Bill Griffiths book First World War Heroes of Wotton-under-Edge. This ledger contains information on the health status and occupations of the men of Wotton.

The second Ledger contains the names, addresses and signatures of 137 men, 56 of whom served in WW1. Eight of these men died in action and are listed on the Wotton-under-Edge War Memorial, the Roll of Honour displayed in the Town Hall and in Bill Griffiths book First World War Heroes of Wotton-under-Edge. 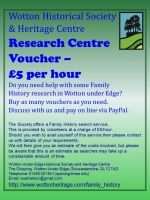 The Society offers a Family History search service.
This is provided by volunteers at an hourly rate.
Should you wish to avail yourself of this service then please contact us with details of your requirements.
We will then give you an estimate of the costs involved and you can incrementally increase the number of vouchers you purchase accordingly.
Please be aware that this is an estimate as searches may take up a considerable amount of time.