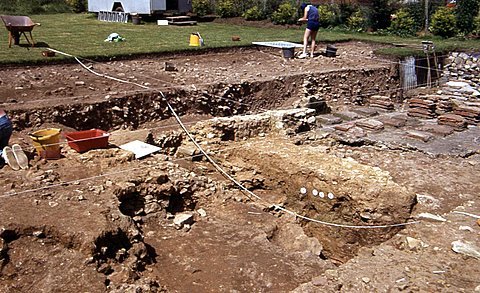 It was discovered in 1981 by accident by the then landowner, Paul Cory, when digging a hole for a fence post and coming up with a piece of mosaic flooring and pieces of painted wall plaster. Some local enthusiasts  opened a trench which revealed the badly-damaged pilae of a hypocaust system of parts of two rooms of a bathhouse, together with considerable quantities of painted wall plaster, tesserae and tegulae, some pottery and bone.

In 1983 the site was taken over, at the request of Mr Cory, by the University of Keele as a training excavation for students from not only England but from various parts of the world as well. Wortley continued to be a training excavation site until 1996. Tthe uniqueness of the Wortley site lies in two of its structures: its cellar and its bathhouse. 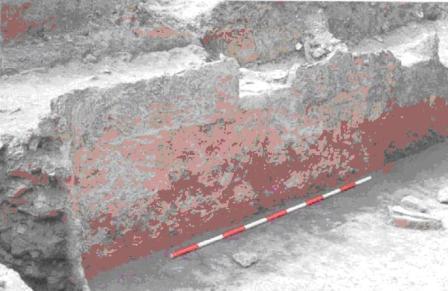 Cellars on Romano-British sites are commonly seen as storage areas; they are relatively rare in Roman Britain, and their construction is mainly restricted to the period AD70-155. But the cellar at Wortley was, in origin, not a simple storage facility, but an underground cult room. The evidence for this special use is fourfold. First, the walls had been decorated by coloured paint- ing rather than the plain whitewash of a storage room. Second, the southern wall had niches in it which may have held cult images (Fig. 1).

Fig. 1 Niches in the southern wall of the cellar 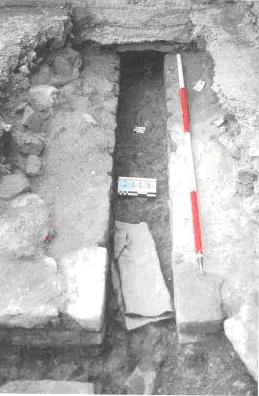 Third, the cellar had two splay windows in its western wall, not on its own an indicator of a cult room, but significant when considered in conjunction with the other evidence. Fourth, the association of the cellar with water. This latter was strikingly evidenced by a cruciform channel-system beneath the cellar’s concrete floor, running from the central point of the floor to the west, east and south, with the beginning of a fourth channel running northwards under the half of the cellar not available for excavation. Each of these channels was covered by capstones mortared onto the stone edges of the channels (Fig. 2), and over time the channels had become filled with clay(Fig. 3).

Fig. 2 Capstones over the southern channel beneath the cellar floor 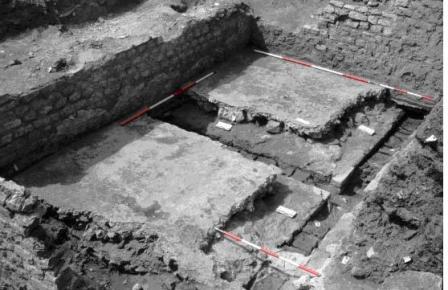 The most surprising aspect, however, was that all three complete channels ran beneath the walls of the cellar, under rough stone lintels, but ended at the outer limits of the walls. Consequently, they were not part of any drainage system,  but  were  associated  solely with the cellar. We can’t be sure of the 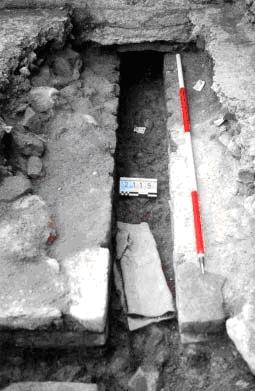 function of these  channels,  but  two  large, folded pieces of lead found in the western channel (Fig. 4) may have formed the lining for a font-like feature set within a hole found in the centre of the concrete floor, immediately above the junction of the channels.

Fig. 4 One of the folded pieces of lead in situ in the western channel

This ‘font’ probably  contained  water brought  up by seepage via the channels, depending on the water table at the time, or it may have been used to receive libations which would then run into the channels. No parallel has been noted in either Britain or abroad for these channels.

That’ll do then for the first unique aspect of the Wortley site. Let’s turn now to the bathhouse. The first striking thing about it was its size: just under fourteen metres in length and comprising six areas, ranging from a hot room to a latrine. And included in these six is something even more striking: a natatarium or swimming pool, some 13.7 metres long and 2.2 metres wide internally. No prizes for a Romano-Briton swimming a width, but good for up-and-down work! Such a pool is extremely rare outside  of large  urban  sites,  and  would seem to be the largest of any known on a rural site. So the presence and size of the Wortley  natatarium   is  remarkable,  but there is another rare, if not 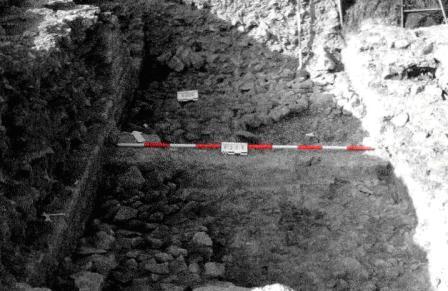 unique aspect. There was no evidence of any non-porous lining to the  surface or the  walls of the pool, and so it seems that it took the form of a large lead tank sitting upon a pitched stone surface. The inner faces of the two north-south walls were badly damaged, suggesting the vigorous removal of such a tank (Fig. 5). Interestingly, the cold plunge bath showed a similar lack of non-porous lining to its floor and what remained of its walls, again pointing to the use of lead to provide a ‘tank’.

There were, of course, other rooms at the Wortley site, but there was no diagnostic evidence to indicate their functions. All that we can say is that they gave the impression of having been rather  spartan  (perhaps not the best term to use!), with no sign of decoration of any sort. All of this leads to the question of what exactly was Wortley all about? We used the word ‘villa’ in our interim reports, but this was perhaps a sort of shorthand, the word being, in archaeology, a catch-all for any building with a Roman wall. We are still debating the function of our site, but it seems very likely that it was a cult ‘centre’ with, perhaps, accommodation for people visiting it. On the other hand, it might have been a more ‘private’ religious complex associated with an adjacent ‘villa’, a possibility suggested by magnetic susceptibility tests which indicate buildings (of unknown date) in an adjacent field.

The writing of the final report of the excavation is nearing its conclusion, and will hopefully be available in the not-too-distant future.

Our thanks to Dr. Wilson for this article.